Photo by Jaime Handley on Unsplash

Affirm – Read our daily affirmation and create your own! Assert your lived and desired truths. Purposefully attract the love, success, and happiness you deserve.

A slight spin off those paint and sip events…

Instead of painting we’ll be FOAM ROLLING!
And we’ll be sippin’ on PROTEIN SHAKES!

Learn about the benefits of foam rolling and its positive impact on muscle soreness, recovery, performance, injury prevention, and range of motion. This workshop is highly interactive and incorporates self-myofascial release techniques that target sore, overworked, and tight muscles. Ideal for anyone looking to take their warm-up, recovery, and flexibility to the next level! Bring a foam roller, exercise mat (optional), towel, water bottle, and your favorite shake cup!

Invite friends and family, bring a foam roller (we have a few loaners),
try some protein shakes, and get your roll on!

The Fine and Amazingly Awesome Print:
(a) Price includes a list of recommended foam rolling exercises, a list of (low carb, low sugar) easy-to-make protein shake recipes, 20% discount off all Nutrology supplement products, a bonus secret giveaway, and eligibility to win raffle prize (FREE 2lb Grass Fed Whey Protein).
(b) Groups must be a minimum of 4 people and a maximum of 10.
(c) If you host the event  in your home and confirm 6 or more people to attend (including yourself), your $49 fee will be waived.
(d) Yes, it’s FREE for YOU if you host 6 or more people!

P.S. Yes! We can also host a Roll & Sip for larger groups in public settings! 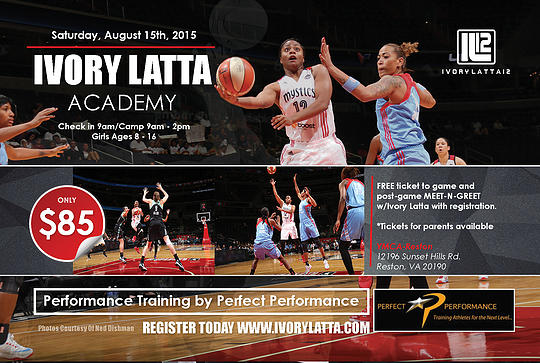 Permission to use photo granted from Ivory Latta. Source: http://www.ivorylatta.com

The Washington Mystics (10-6) led by as many as 24 points and the Seattle Storm (5-14) were never able to recover from such a huge deficit during yesterday’s matinee game. The ‘Stics won 87-74 and slide into second place in the Eastern Conference. After the game, I caught up with the game’s leading scorer, Ivory Latta (20 points, 2 assists), to chat a little bit about her upcoming basketball academy in Reston, Virginia.

This is not Ivory’s first time doing her academy.

I did it in Atlanta and it was a great success, but this is my first time doing it here in D.C. I want it to be a continuous thing. [There are] a lot of girls out there that need to hear a good message they can take going into the school year so they can have their focus and be ready for their season.

As with any camp, there will be plenty of basketballs, a gym, coaches, whistles, several drills, and the squeaky sound of sneakers on the court.

But what will make Ivory’s Academy unique? What should campers and parents expect during the day?

Ivory Latta further breaks it down for us.

My main thing is to also have a segment of my camp where you understand it’s more to basketball. Me, being a college coach for two years, that’s my opportunity to share what I know the college coaches are looking for. My crew will be able to talk to you about social media–the things that you need to watch out for but not to put on social media because College coaches have that one person that’s looking. That’s a big thing of recruiting kids.

It’s not your ordinary camp because there are a lot of things I want to touch on. Kids need to [also] really take care of their money.

Financial literacy is a big topic for anyone and is especially important for athletes who may experience an influx of financial resources. In 2009, Sports Illustrated estimated that 78% of NFL players go bankrupt within two years of ending their playing careers and 60% of NBA players are scraping to make financial ends meet within five years of retiring from the league.

This camp is about learning and finessing both basketball and life skills.

I wish you could have seen the big grin on Ivory’s face as she spoke about her upcoming academy. She is super excited about local girls’ participation in her first Academy held in northern Virginia. It is bound to be a huge success!

Learn more and register at http://www.ivorylatta.com.

Ivory Latta is a University of North Carolina alumna and Washington Mystics point guard currently playing in her ninth WNBA season. This season she averages 11.9 points, 2.9 assists, and 1.8 rebounds per game. She shoots 88% from the free throw line (12th overall in the WNBA), 38% from three-point land (10th overall in the WNBA), and 40% from the field. The Mystics travel to Texas to play the San Antonio Stars (5-14) on Friday, July 31 at 8:00pm ET. The game will be shown on WNBA Live Access.

Amazon deal of the day. 40% off several trigger point products. If you’ve been meaning to get a foam roller, why not get one today? Personally, I have 4 trigger point rollers. 😁 #myofascialrelease #foamroll #recovery #stretch #woosah
My Tweets